A Man and Biosphere Reserve

Palawan Province is dubbed as the Philippines’ Last Ecological Frontier. It is also a Man and Biosphere Reserve as declared by United Nations Educational Scientific and Cultural Organization (UNESCO).

Palawan province has diverse flora and fauna, and rich natural resources spread into a land area of 1,489,655 hectares. Such statistics made Palawan the largest province of the Philippines. It is consisting of 1,780 islands and islets with 1,959 kilometers of irregular coastline, and 9,900 square kilometers of coral reefs  resulting in numerous coves and bays.

The almost 1.5 million hectares of land area is geographically located within the world famous Coral Triangle. It lies along the Sunda Shelf which cradles the world’s most diverse marine ecosystems.

However, the elongated configuration of Palawan island, with its lofty mountains, limited watershed areas, short rivers and permeable nature of its geologic constitution made the Palawan province a fragile structure.

The Lush Terrestrial and Mangrove Forest and their Midges

I came to Palawan in 1988 to work with an NGO as a Community Organizer. My employer deployed deep in the remote areas of the province. There I enjoyed the wilds and the lush vegetation, the biosphere reservation that it is. The reserve covers 690,000 hectares of terrestrial forest, and some part of the 42,500 hectares of mangrove forests that I have not seen in Mindanao.

The down side is when you’re new in the area, part of the experience is being bitten by the nik-niks (midges or sand flies). For the first 3 weeks I was itching like hell, but they said I will  get immune to the bites. It was true.

Nik-nik bitten and all, I was loving my life at our base office at kilometer 25 north of Puerto Princesa City. 200 meters from the back of our office’s structures is a mangrove forest. The forest is part of the estuary of Honda Bay and the Bacungan River (one of the 28 principal rivers in Palawan Province).

The Fishing Grounds and Some Wildlife

In those mangrove forests was a small tributary river that we navigate in the evenings to go overnight fishing in Honda Bay. We cruise the river during moonless nights, and with that, iridescent fire flies paved our way into the sea.

Honda Bay in Puerto Princesa City is one of the major fishing grounds of Palawan. Along with Malampaya Sound in the municipality of Taytay, Coron Bay, Bacuit Bay in El Nido, Sulu Sea, Kalayaan, and Tubbataha in Cayancillo .

Coming back in the morning, after a stop over in one of the islets in Honda Bay for a swim (I think we like Luli island, or Snake Island, and/or Pandan Island), hoping that I would be able to see a Dugong or Sea Cow.

15 of the 25 marine mammals in the Philippines are found here in Palawan. I have not encountered one yet. It’s maybe because I’m not so much of an underwater gal.

Anyways, our way back offsets the challenge in trekking and cruising the river in the dark. I get to see the spectacular wildlife in the mangrove forest.

One of which is the mildly poisonous mangrove snake, Boiga dendrophila multicincta. It is also called gold-ringed cat snake because of the golden yellow ring stripes. The snake’s local name is Binturan. And, you won’t miss seeing monitor lizards swimming, crossing the river.

Palawan has 24 endemic reptiles out of the 69 species that are found in the province. Well, some of them I encountered inside our house (a cobra) or in the garden, or while walking in the path along the bushes to go to my neighbor’s house.

Birds fly and swoop around as our noisy motorized banca cruises the mangrove river. Palawan province have 31 or 90% of the mangrove species known in the country.

The roaring banca is not a nice way to say hi to the birdies but I get to see a few exotic kind of the 279 bird species in the province.

I saw kingfishers, flycatcher, a babbler, some white and dark phase egrets, woody wood pecker, at some rare times a sea eagle. Or, maybe it was a goshawk.

In the evening, when it’s low tide and the moon is not in sight, we would venture in to the rocky shallow water of Honda Bay with Coleman lamp, armed with bolos and spears. The activity is called mangilaw/pangilaw. The primitive torch fishing.

We collect all sorts of sea creatures that are edible. But at some point I felt that such occupation was kind of cruel. You know, like slicing the fish or crab in two while swimming and crawling under the shallow water, or jabbing them with a spear. Although the sad feeling, overall, I enjoyed those short pangilaw expeditions.

angilaw ventures are a bit risky if you are not careful. One time a colleague of mine was stung by a small stingray. He suffered with it for weeks. So I think that’s why it was easier for me to become vegetarian in the later years here in the province of Palawan.

After an hour of marine animals hunting, we ended up with a bucket full of fish, shells, crabs, sea cucumber, seaweeds, sea eels, sting rays, and others I couldn’t recognize. It was our food for the next day.

The road was not paved then and no electricity. Fresh mountain mist fills the air in the early mornings. Living early for a drive to the city, throngs of tiny white, a little pinkish, butterflies open the road for us. It was like nature’s gesture to signify the start of our day.

And, off we go to town for our groceries, movies, and other things one does in town. Coming back was always pleasant, looking at the panoramic view of rolling hills and mountains. They look vibrant and alive with strips of white waterfalls. I enjoyed counting them as they appear one by one during the rainy season. There are 44 of them strewed all over Palawan province.

Aside from waterfalls, water resource in Palawan Province is abundant. There are 15 lakes, 42 ponds, 72 natural springs, 9 mineral springs, 43 streams and 165 creeks documented as potential sources of water for domestic and agricultural use.

Water a resource that is crucial to our Community Development Work in the country sides of northern Palawan. I spent my verdant adventures in the wild, in the municipalities of Roxas and Dumaran.

It was there that I chance to see Mr. Armadillo and Mrs. Porcupine.  Monkeys hovers while we are trekking the forest and  running wild pigs startles us on our way.  Wild cats or civet eyes glow in the night, maybe pooping the most expensive coffee in the world, Kopi Luwak. The wildlife that I encountered was just a minority of the 58 species of the recorded terrestrial mammals in the province.  33% of the recorded terrestrial species are endemic to the country and 16 out of the 58 are restricted to Mount Mantalingahan Range, in the southern part of Palawan.

The Froggies and their Love Life, Er, Wildlife

One of our staff houses in our service areas was built next to a creek. And every night, as we ended our chat and just as we were about to sleep we’ll have a good laugh listening to the frogs’ different style of croaking.

Do you know that croaking is the male frog’s drama to attract a lover? Female frogs think croaking is very sexy. And sometimes they just sound so needy. Or maybe we are the ones missing our lovers in the middle of the night. LOL!

Anyways, 8 of the 11 amphibians endemic to the Philippines are found only in the Palawan province.

Four or five years ago I noticed a change in the frogs croaking sound here in Puerto Princesa City. They sound like geese and sometimes even like a cow’s short moos. Huh!?! And now they’re charming geese and cows!?!

Funny, yes, but I’m also apprehensive that there might be changes in the ecology, or something. I’m no environmental scientist nor a biologist but it’s really a strange occurrence for me.

There is actually no end to this amazing walk in the wilds. Palawan does exhibit high degree of endemism of its fauna. I have not included Palawan Flora in here yet. It is just an attempt to show how special Palawan province is. And that, it deserves to be considered as Man and Biosphere Reserve (MAB). 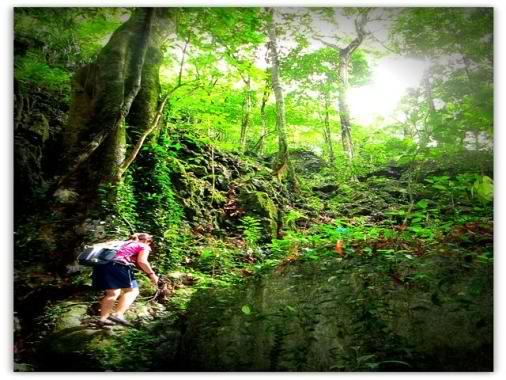 UNESCO’s MAB program does not really impose any regulations nor restrict the use of the resource. nonetheless, it is an excellent campaign that breeds people’s strong mindfulness of its environment. And in so doing, prompts people to be more responsible for the conservation, protection and sustainable utilization of what is abundantly bestowed upon us.

Palawan Provinces’ Stewards of the Land WE Unconsciously Struck

The Palawan province’s grandeur was not afforded into the land without its concierges. Three major ethnic groups stayed with it when landmasses divided itself into continents and islands. They are believed to be the descendants of the Tabon Cave men. Namely; the Bataks – occupying the North-Eastern part, the Tagbanua – settling in the Central and Northern part, and the Pala’wan – dwelling in the Southern part of mainland Palawan. And even the island municipality of Balabac in the south, has first the Molbogs as its stewards.

The Indigenous People of Palawan, they are nature nurturers and worshipers. Because of that they will not destroy their land, their home. They have, for so long a time, established a relationship with their environment.

But because of migration and development aggression, their population has tremendously decreased, their cultural beliefs waning, their sustainable living patterns replaced, their defense weakened and diminished.

Obviously, they will not be able to stand as the keepers that they should be, to yet another assault, as the National and Provincial government push for the establishment of Coal-Fired Power Plant in Aborlan, Palawan.

In the words of Ansel Adams, Photographer and Environmentalist:

“It is horrifying that we have to fight our own government to save the environment.”

and drink the water. Don’t sit this one out. Do something.”